Hi Folks! Short month with Santa and Christmas. I was thinking not to bore you with the usual tl, dr news stuff, instead I write about my favorite beverage :), this way wishing you Merry Christmas and a Happy and Prosperous New Year. Enjoy! 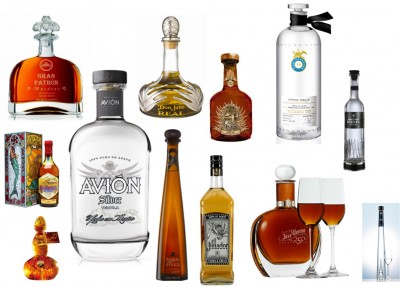 What makes a good tequila?

It is definitely not the worm that does the job, but I’ll get back to this later. Tequila is a high alcoholic content beverage made in the western Mexican state of Jalisco from a cactus-like plant through fermentation and double distillation. The basic types are blanca (aged only for a few months), reposado (aged about a year), añejo (aged from one through three years) and the extra añejo, which is “rested” in an oak barrel for the longest time. This is probably more than most people know about it.

Being Hungarian I was not much of a tequila lover either until I first set my foot in California a few years ago. In fact, I only knew it by drinking it with lemon and salt, which, on the one hand, did look pretty cool back then, and on the other, took away the horrible taste of that thing I wouldn’t call tequila now by any means. Lemon and salt is for losers! And then in 2003 everything has suddenly changed, and I became a fan of this magnificent juice of a similarly great plant, called the blue agave.

But what is it that makes you addicted once you’ve tasted? Although the total production of tequila was about 260 million liters in 2011, which includes 155 million liters of 100% agave made (the rest is mixed), surprisingly little is known about its chemistry. The lack of knowledge is even more surprising knowing that the biggest importer is the United States, where 51.3 million liter of tequila (made of 100% blue agave) was consumed in 2011.1 It is nearly 3% of the total amount of spirit consumed nationwide.

Ok, so what do we know about it? We know that tequila is made via slowly cooking the piña, which is the heart of the blue agave collected by the cultivator (El Jimador), on an oven and fermenting the produced sugars (glucose, fructose). After double distillation we have the basic nectar, which is then aged according to the quality to be achieved. Aging usually gives some sort of a darkish color, which process is replaced by adding caramel to the liquid in case of poorer quality brands. Also, people often add extra sugar (not more than 49%) from cane before fermentation. These are called tequila mixto.

But, what does it contain chemically? According to the paper published a few years ago, tequila has around 200 different individual components, which could be identified by the authors using GC-MS.2 The real number of components is possible even larger. Among these, and of course besides ethanol, one can find 2- and 3-methylbutanols, 1-propanol, 2-methylpropanol and ethyl acetate. Furthermore, the following powerful odorants are responsible for most of the aroma you experience while drinking a nice shot. These are isovaleraldehyde (coca, chocolate), isoamyl alcohol (whisky-like), b-damascenone (woody and sweet), 2-phenylethanol, and vanillin (sweet and creamy, vanilla-like). Next to these were found guaiacol (smoky and phenolic), decanoic acid (fatty), acetaldehyde (chemical, sharp), isobutyraldehyde (sweet, caramel), ethyl propionate (sweet, butterscotch, fruity), diacetyl (butter), isobutyl alcohol (sweet, chemical), linalool (floral, sweet), 2-methylbutyric acid (fruity, sweaty), and phenylacetic acid (pungent, floral, honey). The chemicals that build up this complex system belong to the groups of acetals, acids, alcohols, aldehydes, esters (the largest group with more than 50 individuals), ethers, furans, ketones, phenols, pyrazines, sulfur compounds, and terpenes.

Despite of the extensive analysis though, the authors were not able to "artificially" compose the enjoyable drink, leading to a conclusion that there may be something still missing from the already extensive list of chemicals. Or is it the soul of the Jimadors. Not yet known, but needs to be figured out. Here is another fact. Strangely enough, one of the ways to distinguish good quality tequila from a poor one we need to focus on their methanol content. It's been known that methyl alcohol acts as poison to humans, however, this exact same constituent can be found in 100% agave made spirits as well, being a clear quality check mark. You should not worry though, at this concentration it is not harmful to human health.

Now, let’s get back to the worm myth. First of all, it's not a worm, but a caterpillar of the moth Hipopta agavis. That lives in the plant. Secondly, originally this has nothing to do with tequilas. Only certain other mezcals (other alcohols made of agave) can have “worm in the bottle”. And finally, let’s finish this post with another, more recent, yet fascinating research result. Did you know that scientist could turn tequila into synthetic diamonds? Apparently all it takes is to gasify liquid tequila, heat up the gas to break down its molecular structure and create nano-sized diamond crystals.3 Liquid tequila has just the right ratio of carbon / hydrogen / oxygen to do the job. A precious solid carbon allotrope from a similarly precious liquid material! Do I have to state the origin of the creators?

Well, that's enough for now. All is said, but my favorite, which is Cabo Wabo reposado, straight, after mild chilling. What's yours? Cheers and Merry Christmas to Y’all!

Calculations you can trust

Chemaxon AWS Calculators and Predictors SaaS services has passed one of Hungary’s leading...

As Richard Jones said, “Chemaxon has a best-in-class, single research platform in the cloud for...

Calculate on the cloud

In order to increase the flexibility, access and integrability, Calculators and Predictors have...

Chemical.AI, a global leader in Artificial Intelligence (AI) for synthesis route design and...